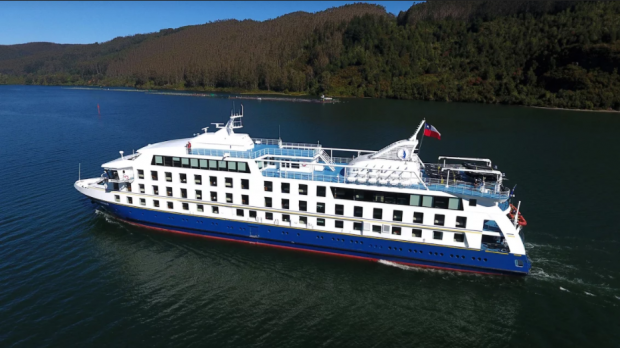 Patagonia – the wild, southern tip of South America – has a brand, new cruise ship with the christening of Ventus Australis and her first summer season of ‘bottom of the world’ voyages to Cape Horn and the glaciers of Tierra del Fuego from January 2, 2018.

To mark the debut of Ventus Australis – the second ship for the Chilean cruise line, fares have been frozen for the 2018/19 summer season. The inaugural series of cruises for the new expedition ship from January to March, 2018, is heavily booked, with some cabins still available, and early bookings for the following summer program from September, 2018, to March, 2019, are already strong.

Latin for southern winds (Australis – southern; Ventus – wind), the 210-passenger Ventus Australis has been christened in a ceremony at the Asenav shipbuilding yard where she was built in the southern Chilean city of Valdivia. The godmother is Sol Lecaros de Nevares, the niece of Australis President, Pedro Lecaros.

Tailor-made for cruising along the mountain and glacier-lined fjords of Patagonia, Ventus Australis is a twin sister to Australis’ other ship, the 210-passenger Stella Australis, launched in 2010, which also offers expedition voyages through the channels and fjords of southern Chile.

Based in her Chilean homeport of Punta Arenas – the world’s southern-most town – Ventus Australis will offer four-night cruises from Punta Arenas to Ushuaia in Argentina or return.

Australis is the only operator to offer regular cruises through the narrow fjords of Tierra del Fuego and to offer passengers the chance to go ashore on fabled Cape Horn. Australis incorporates the latest environmental technology to ensure the conservation of the pristine nature areas its ships visit each year.

Like Stella Australis (Latin for southern star), Ventus Australis will offer cabins with extra-large panoramic windows (almost floor to ceiling) so guests can enjoy vistas of spectacular scenery bathed in extended summer daylight. All guests will be offered complimentary, guided excursions and nature lectures as well as a free open-bar. Cuisine aboard includes local dishes as well as Chilean and Argentine wines. English and Spanish are spoken onboard.

Cruises aboard Australis’ ships through the spectacular fjords of the Magellan Strait, Beagle Channel and Tierra del Fuego can be added on to tours exploring the rest of South America.

Fares have been frozen at current levels for Ventus Australis’ second season from September, 2018, to March, 2019. Australis is also offering a 10 per cent discount to passengers who combine two four-night cruises to create an eight-night exploration of the spectacular mountain and glacier-lined fjords of Tierra del Fuego, the Magellan Strait and Beagle Channel.

Favorites for channel <code>UCkQjQzzTpb5cJ59IAkQzbfw</code> are not public.